We started our year with our Sunday Morning meeting at 10.30am.  The meeting was led by Major Peter West and the text for the meeting was taken from the book of Jeremiah in the Old Testament.

We held a prayer week where our hall was open between

The hall was laid out in various prayer stations where people were encouraged to pray for themselves, for our church, our local community and issues effecting the world.

We held a worship meeting at 6pm to finish our prayer week.  Our worship band provided the music and the congregation joined in with some hearty singing, clapping and dancing.  The worship band featured:-

In the photo below you will see bunting stretched across the front of our platform.  Each member of the congregation was asked to write one word on a piece of bunting.  We were asked to then focus on this word throughout the year.

We were invited to sign cards reaffirming our commitment to follow Jesus.  These cards can be seen on our mercy seat.  Also on our mercy seat are the prayers that were written duing our prayer week.

The meeting focused on the 'Fit for Mission' strategy of the United Kingdom Terriroty of The Salvation Army.  More about this can be found at www.salvationarmy.org.uk 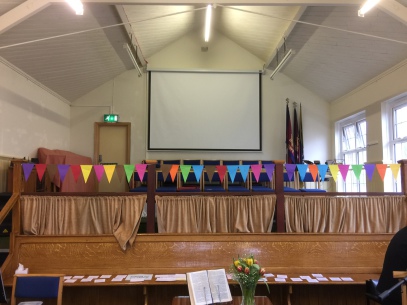 At our Children's Carol Service in December, the children were presented with a christmas present of a trip to the Marlowe Theatre in Canterbury to see 'The Snowman'.

The show was acting and dance set to music, including the famous piece 'Walking in the Air'.  The children all had a very enjoyable time and were treated again to a white chocolate snowman, given to them each by Sue Mitchell.

Launch of our Self-Denial Appeal

In addition to our morning meeting we held our Corps Council Meeting at 2.30pm in our Youth Hall.  This meetign is made up of various representatives within our church and we meet to discuss issues effecting the church and plan events for the future.

We had a record number of children attend.

For 6 weeks (1st March to 5th April) we are holding a series of Lent Bible studies in our Youth Hall, every Wednesday from 7pm to 9pm.  This year the focus of the study is on prayer.

Members of our church joined with others from the town to mark Women's World Day of Prayer.  The event this year was held in St Leonard's Church 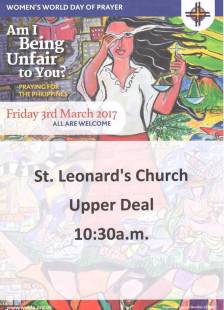 Children from our Sunday School Youth Zone played a key role throughout our Mother's Day Meeting held at 10.30am.

The children performed 3 short plays.  Each was introduced as a news item, switching to a 'on the scene' reporter who told the congregation news about Jesus whilst other children acted out the scenes.

Part 1 reported on Jesus calling fishermen to be fishers of men, and the children concluded with the singing of that children's chorus.

Part 2 reported on some well know stories of Jesus, including telling us to love our neighbours and where he healed a blind person

Part 3 reported on the story of Mary and Martha.

Some of the children performed a 'timbrel' display.

The children sang "If you're happy and you know it" will a loud shout of "Jesus" in one of the verses.

Two of the children assisted by collecting the offering.

During the singing of the last song, the children distributed daffodils to all the mums in the congregation, which were most appreciated.

Thank you for the world so sweet,

Thank you for the food we eat,

Thank you for the birds that sing

Thank you Lord for everything

The message was given by Steven Parks and followed on from the children's play about the visit of Jesus to Mary and Martha. 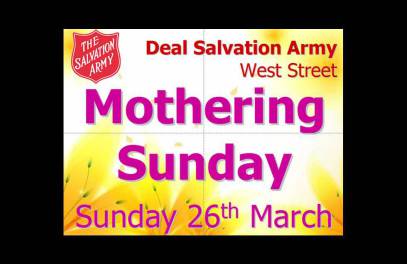 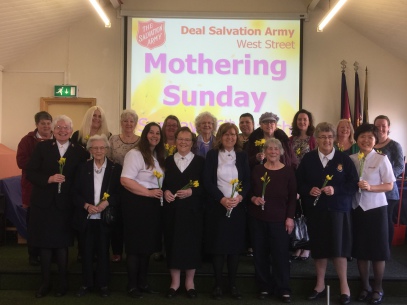 It was with great pleasure that we saw the commissioning of Brian Bamford as our new Corps Secretary.  Brian joins Stehen Windsor (Corps Treasurer) as one of our senior Local Officers.

Brian was put straight to work, as he delivered the message based on 1 Corinthians Chapter 12 - Spiritual Gifts from the Holy Spirit.  Brian reminded us that we have all been given different gifts and challenged use that we have a responsibility to use them in accordance with God's wishes and to bring others into a knowledge of His love. 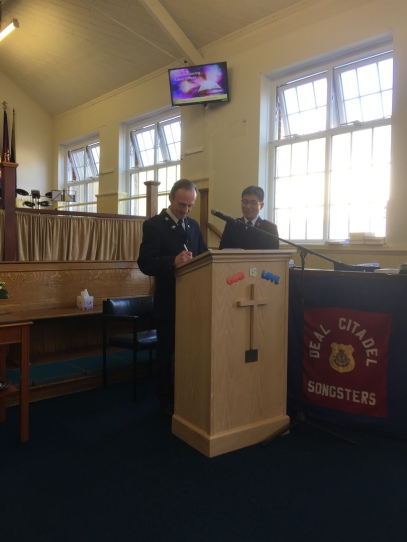 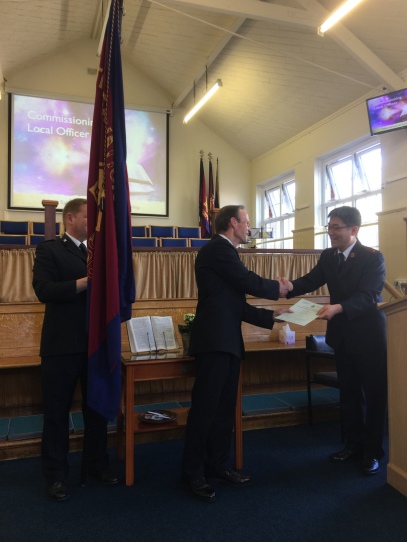 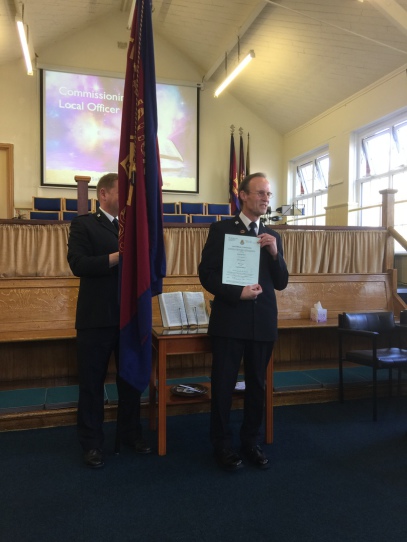 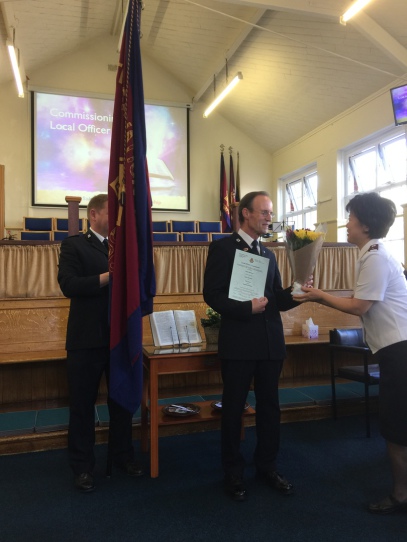 Our Palm Sunday meeting was led by our musical sections.

Our Sunday school children prepared Easter cards for members of the congregation, who in return promised pray every day this week for the children.  The children also decorated easter eggs and took part in an easter egg prayer hunt.

We held another prayer week from Monday to Friday during Holy Week.  Our hall was open between

The hall was arranged into a number of prayer stations where people were encouraged to think about the events of Holy Week.  In the center of the hall were a series of stories and prayers from children in Syria and a reminder of the need of prayer for the people in that country. 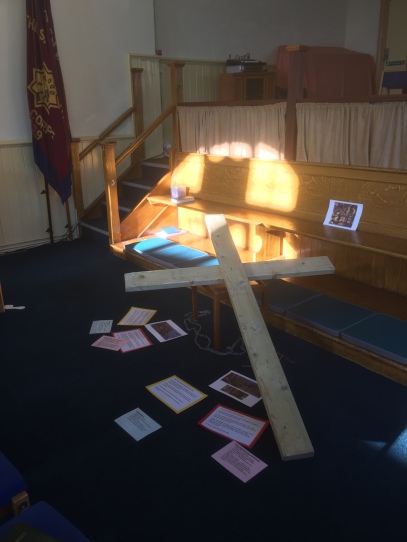 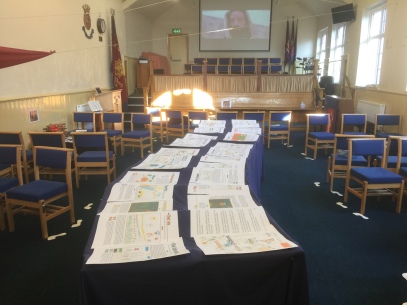 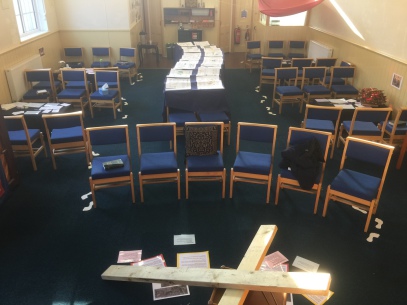 We joined together for our Good Friday service at 10.30am.  The hall was still arranged into the prayer stations for our prayer week.

Following the meeting we shared fellowship in our lower hall whilst also sharing in some hot cross buns.

One of the images below show the beautiful flowers arranged at the foot of the cross by Hean Suk and the written prayers from the prayer week brought to our Mercy Seat.

The other image is the front page of the order of service for the meeting.

The songsters sang "Broken for me"

are the order of service used in the meeting.

As always, this most important of meetings reminded us of the sacrifice Jesus made for all of us.  It was again a very moving meeting. 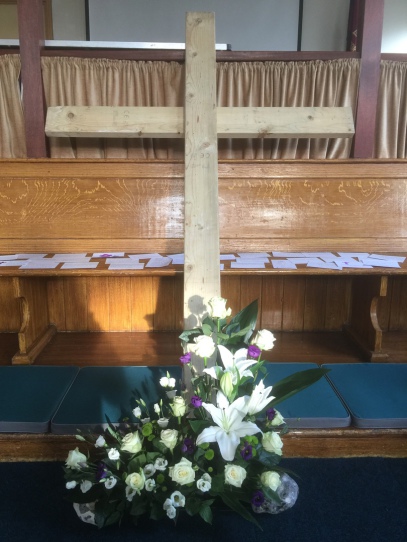 Many of our congregation joined together for our traditional Easter Sunday cooked breakfast at 9am.  The food was cooked by Maureen, Steven, Vicki & Yvonne.

Our Easter Sunday meeting was held at 10.30am and was led by Major Peter West.

The songsters opened the meeting by singing a song written by a member of the congregation called "In the garden" set to the tune "As the deer".

Songs included "Christ the Lord is risen today", "Alleluia, alleluia, give thanks", "He is Lord", "Christ is alive" and conlcuded with a rousing singing of "Thine is the Glory."

The children made Easter bonnets.

The theme of the meeting was "You are looking in the wrong place".

Following the meeting we gathered for our now traditional Easter Sunday church photo.

We then assembled at Dear Pier for an open air meeting of celebration and witness.

The following images show the children with their Easter Bonnets, our church photo and images from our open air meeting. 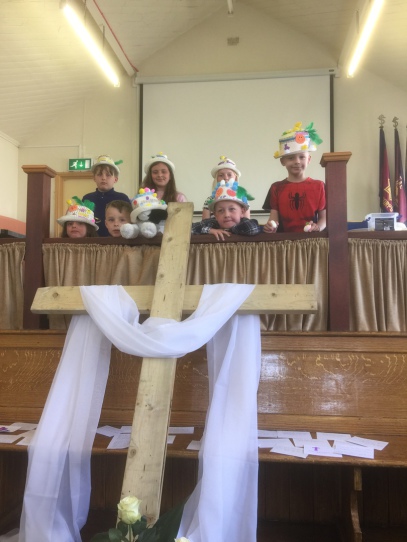 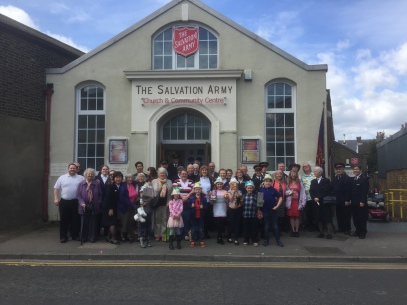 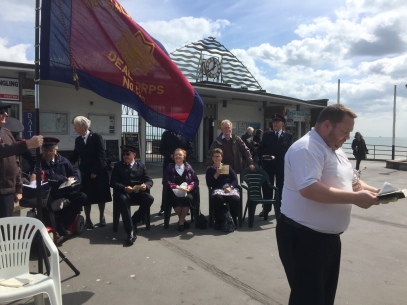 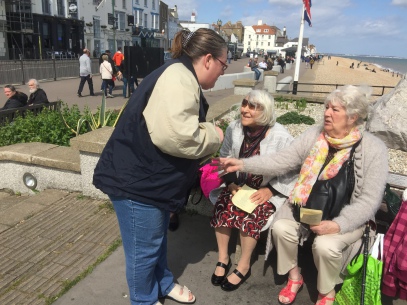 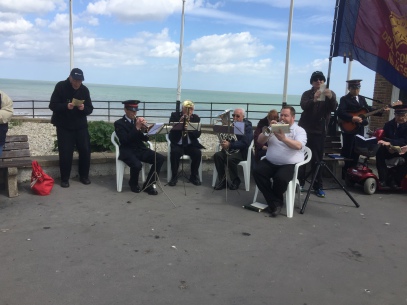 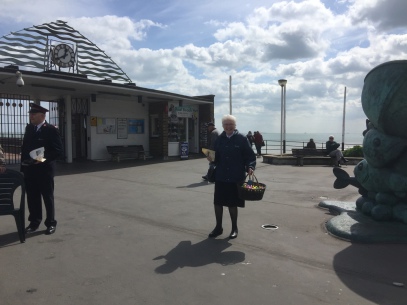 We held our latest Messy Church on Saturday 29th April.

At 3pm we held a prayer meeting for the launch of Christian Aid Week.  This was an opportunity for people form all churches to join together to think of the work completed by Christian Aid in some of the poorest countries in the world and to pray for a sucessful fund raising effort.

Kook Hwan, Hean Suk, David, Stephen, Vicky (and Emma and Louis), Sue & Steven went out collecting on behalf of Christian Aid.  Prayer was answered, as despite the weather forecast, the rain held off until we had finished.

Our regular Home and Family Meeting held on a Tuesday held it's United Rally where people from other churches were invited to join us.  Our guest speaker was Major Linda Herbert. 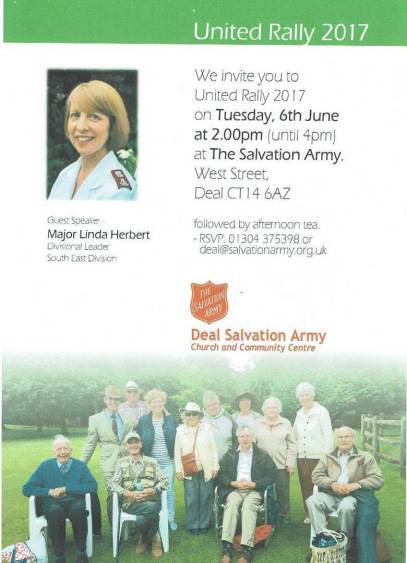 The Big CollectionCarolling in Sandwich

During September we take part in The Salvation Army's national Big Collection.  Volunteers all over the country collect door to door to raise money for the work of The Salvation Army in the United Kingdom territory.  Other than the government the Salvation Army is the biggest provider of social services in the UK.  This year our church collected £5,532.79 which is a fantastic amount with a small group of volunteers.  We pay special thanks to our Corps Secretary, Brian Bamford for all his hard work in organising our Big Collection.

During our morning meeting we will join with the rest of the Country in observing silence at 11am in memory of those who have made the ultimate sacrifice, the loved ones who remain and those injured doing their duty to preserve our freedoms. 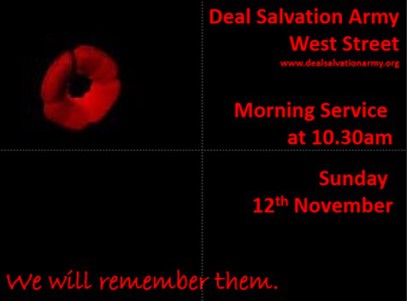 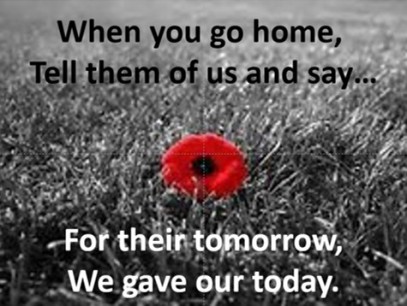 We held our annual Christmas Fair.  There were various stalls in our upper hall and cooked breakfasts and cakes being sold in our lower hall.  We raised £556.85 which was the best result for some years.

Each year Trinity Church holds a Christmas Tree Festival which is a fantastic event.  There are over 40 trees displayed by various individuals and organisations in the town.  This year our tree was themed on the loaves and the fishes.

Our Band, ably supported by collectors and singers, played Christmas Carols in Deal High Street.  We collected £1,387.25 for which we say a big thank you to the kind and generous people of Deal.

Our band played Christmas Carols at the Guildhall in Sandwich.  We were again supported with collectors and we were pleased to welcome the Mayor of Sandwich who joined in singing with the Band.  We raised £381.96.

Our Sunday School Children took the lead in our morning Carol Service.  The theme of the service was "presents" and thinking about the special gift of the birth of Jesus Christ.  The children presented a timbrel (tamborine) display and then presented a 3 part play, some of which was pre-recorded.  The play ended with the children bursting out of large presents and explaining the various presents that were involved at that first Christmas.  Despite very limited time to practice the children were wonderful and all who attended were both impressed and blessed.  Some pictures are shown below. 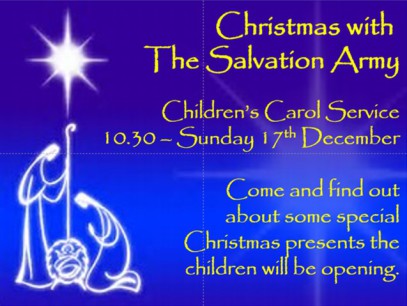 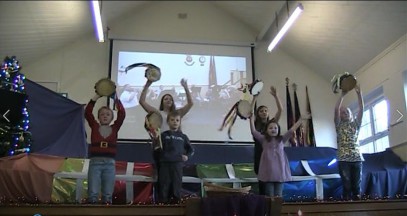 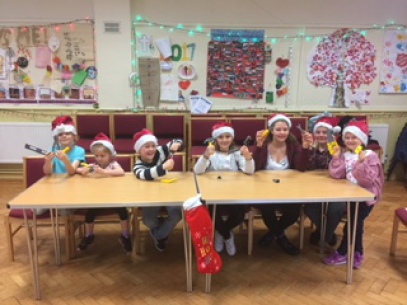 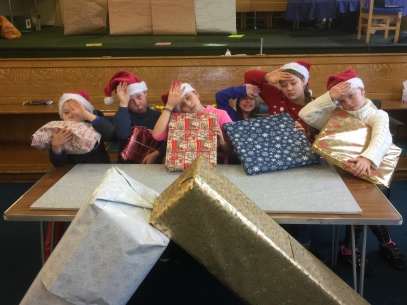 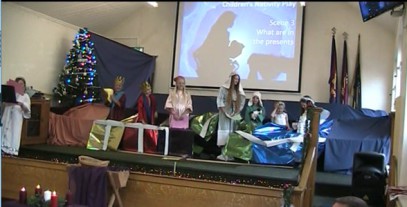 We held our traditional Carols by Candlelight at 6pm.

The meeting started with the Carol - O come all ye faithful.

The meeting also featured our Band, Songsters (choir), Worship Band (Sally, Shamus, David, Kook-Hwan and Steven), recorder solo by Maria, a timbrel display (Lorraine, Elsie, Sue, Hean-Suk and Steve) and a duet of the Song - There's a light in Heaven's window by Lorraine and Steven.

Following our Christmas Day Service at 10.30am people who would otherwise be on their own at Christmas gathered for a meal and fellowship.  Due to generous donations from the public we were able to provide a traditional Christmas Dinner for over 30 people.

We thank all those that donated, and very special thanks to those people who volunteered to help with the cooking, serving and clearing up afterwards. 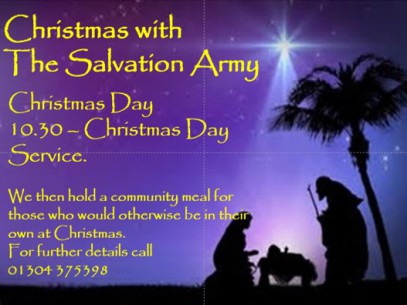