We have shown the history in date order.  Where there is uncertainty over a date we have included the item at the bottom of the page.

Where we have added explanatory text this is included in brackets [  ].

Unless otherwise credited, the information has been taken from our History Book.

If you have any additional knowledge or photos about our history in the 1970's or you can provide any further information about what is on this page, please get in touch.

We hope you enjoy reading through the material.

Self-Denial effort.  Quite a good response.

"What five characteristics makes the finest mum in the world".  Heading the list "My mum is the best in the world because she is a good cook."  Quite a good competition, most children entered for it.

A busy weekend with much blessing.  Canterbury singers in for the Saturday night.  The rally on Monday chaired by the Mayoress (Mrs John Blake).  Special speaker Mrs Lt Col Buist.  All seemd happy.

Word came from DHQ [Divisional Headquarters] of the appointment of Major Emily Dickman to take charge of the Deal Corps as from Thursday 28th May.  The Major comes from Ryde, Isle of Wight and will be assisted by Brigadier Florence Denyer (R).  A warm welcome awaits them.

A very warm welcome as we take over the Deal Corps.

Welcome meeting on Sunday as young people and workers were at Folkestone on the Saturday, taking part in a programme.

CO's [Commanding Officers] on furlough.  Locals did the meetings, good report on return.

50 years harmony for Bandmaster and Mrs Dockrill (R).  A lovely crowd gathered for the ocassion.

Sunday evening service and Alter Service was conducted by Major E Munn.  This was up on previous year.

A number of our comrades went off to Bognor Regis for the Holiday with a Purpose and came back with great blessings.

Special Meeting arranged by B/M [Bandmaster] and Mrs Charlton.  THe visit of Grimsby Over 60's club who rendered a fine programme supported by Deal Band.

Chairman for the evening was Dr J Luker who was a very worthy chairman.  134 attended.

Meetings were conducted by Lieut Col & Mrs Buist, Divisional Commander.  Very good meetings, enjoyed by all and very good attendance throughout the day.

The following images are list of the stalls, helpers and how much money was raised - unknown why the lists are slightly different. 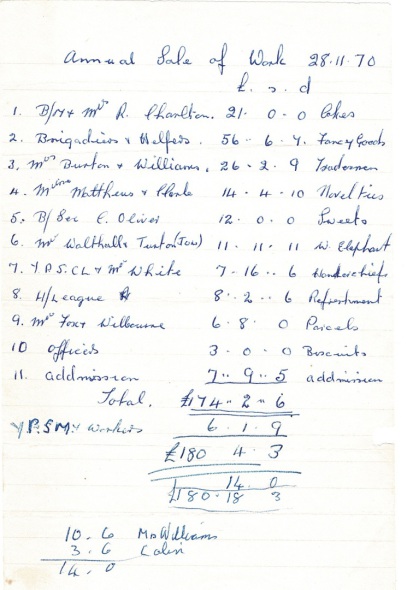 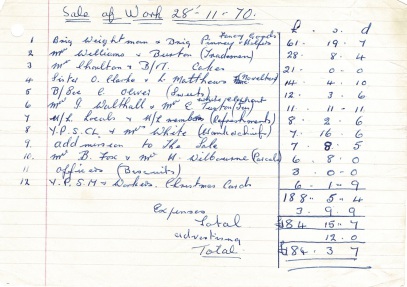 Band and comrades work hard and did well.

The history book contains a list of roads where carolling took place and the amount of money collected.

The History Book has the following entry...

The British Congress, Wembley.  Comrades from Deal attended the various events of the Congress.  On the Sunday two buses were hired to convey us, whilst in the afternoon we were prominently represented in the "march past" with our YP Band, Junior Soliders and Guides. 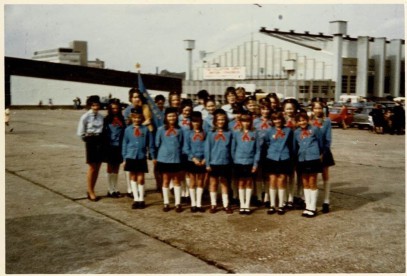 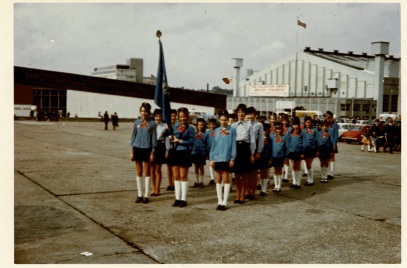 The following images are

Photograph provided by Miss Margaret Robinson (pictured on the far left in the photograph). 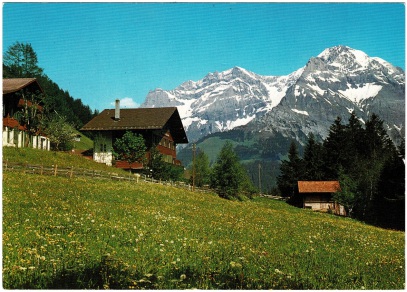 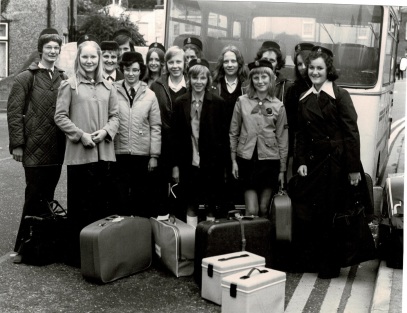 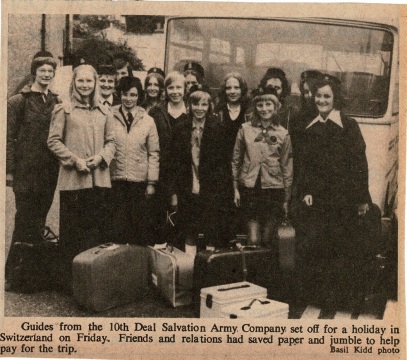 The following images are 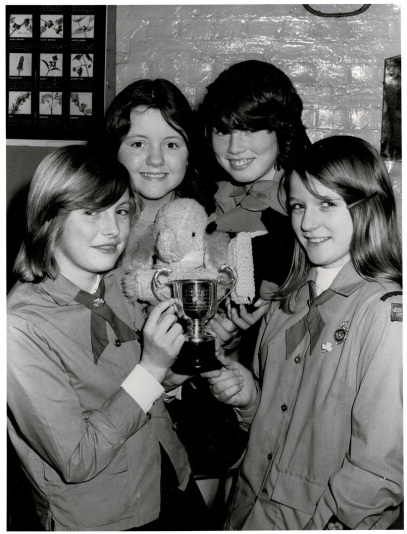 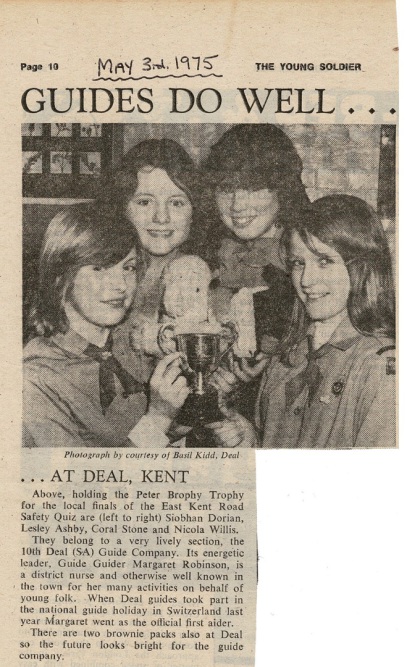 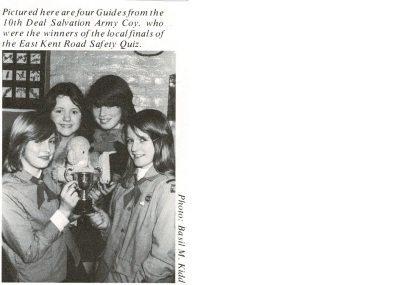 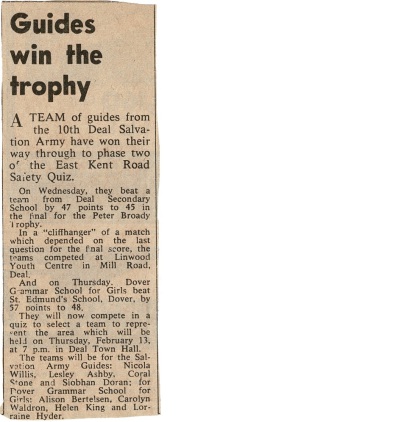 The Guides visited Plon in Germany.  The below postcard is from the visit. 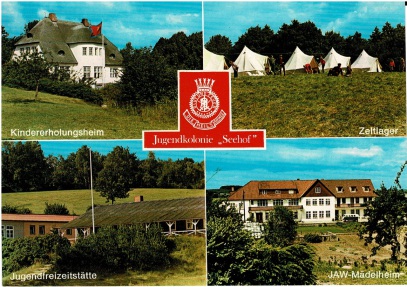 The following photo is taken outside the Ashwood Hotel in Great Yarmouth.  The history book records "Over 60's holiday to Great Yarmouth with Lieut and Mrs Leech.  A great sucess and hoped to be a yearly venture. 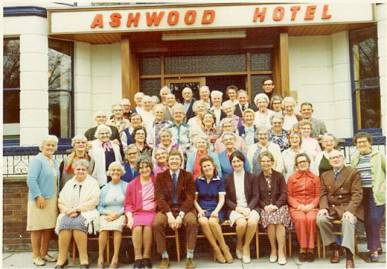 The following photo and newspaper article (believed to be the East Kent Mercury) show the Guides from The Salvation Army and Trinity Church helping with the cooking at the camp.

The mention in the article of taking on 25 challenges on a Jubilee Theme, suggest this was from 1977. 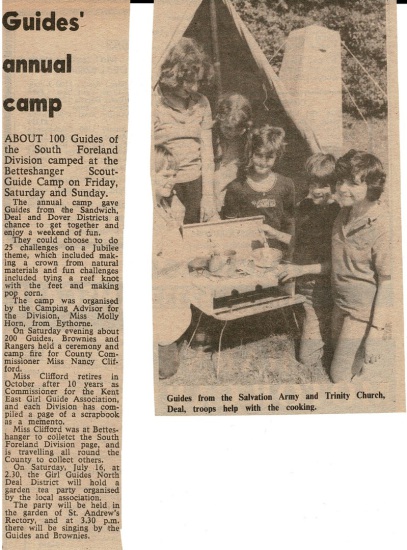 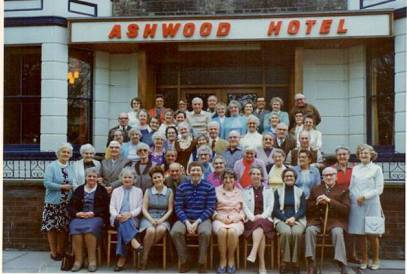 The history book records "Floods hit Deal, a report was sent to NHQ [National Headquarters].  Many Corps folk worked well.  Tributes were paid to the Army for the work done.

The report reads as follows:-

"The flooding of between 700 and 1,000 homes took place on Thursday 12th January 1978 in the early hours of the morning, in some instances up to the depth of 5ft.

As soon as I ascertained the extent of the disaster I contacted the police and social services to see what was to be our best plan of action.  The Social Services immediately asked for the use of the Salvation Army Hall, and the Army to cater for the residents of two old peoples residences.  Lunch and tea was served for about thirty people.

On Friday teams of workers were formed to do house to house cleaning and clearing up, over 200 houses were visited with the help of Corps folk, and other officers from the Canterbury Division.  Spa Road was notified regarding clothing, which was forthcoming on the Saturday.

On Saturday we received the clothing from Spa Road, a coup run was established to help workers in the disaster area as well as households.  It was found that a lot of footwear and clothing had been lost by many people, especially in bungelows, and ground floor flats.  I could see there was a great need in this area, and informed all churches in the town asking them to accounce that we would be receiving clothing and footwear.  A stencil was prepared and run off, inviting flood victims to come and receive free clothing and footwear.

On Sunday, the soup run was again in full operation, and door to door visitation to see where we could be of assistance.  The Corps Band, under my direction were out all Sunday morning giving the clothing leaflets to the residents.  From 3.00pm to 4.00pm the hall was open to receive clothing from the churches and the working mens club, when an announcement was made the previous evening by myself.

On Monday, the soup run was in operation, and again many clothes were received at the hall.  Whilst all this was going on I was out door to door on the district.  During the afternoon the hall was open for free distribution of clothes and footwear.

On Tuesday a hotel in Canterbury offered 50 pillows which were distributed to deserving cases, the halls was again open for distribution of clothing and foorwear.

From Wednesday 18th to Wednesday 24th, the hall was open for the sale of clothing and footwear, from which £200 was raised, and given to the Mayor of Deal Disaster Fund.  In the meantime if anyone from the disaster area needed clothes they could have them free.

From Thursday 19th to Tuesday 31st January an old church in the town was aquired for the storage and distribution of furniture for flood victims, and about 40 homes have been fitted out.  The Deal branch and Dover branch of Courts furniture store, gave us lots of their second hand furniture free, along with many people form the town who also gave genourously.

In the eighteen days following the disaster I have worked closely with the following organisations; provided a list of 100 names and addresses of genuine cases to the Round Table who gave £6 electic stamp vouchers to the same.  Provided lists of old people and one parent families to Roteract for house decoration.  Worked with the Rotary who provided all the soup and bread needed for the soup run, and who contacted the British Shoe Corporation on our behalf, to provide free shoes to those we couldn't 'fit out'.  We worked hand in hand with the Lions Club who were helpful with addresses and information regarding people who needed our help.  We have provided much food and many food vouchers to countless homes.

This has been the eighteen day campaign of action to date.  Much follow up visitation and counselling is in progress."

The following photo is believed to be from 1978.  The rear of photo is endorsed with the following:- 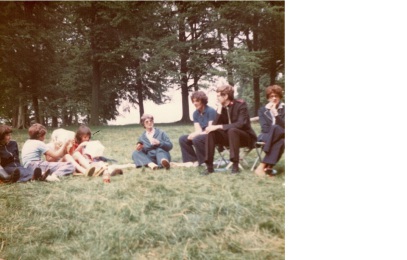 The Friendly Hour, also know as the 'Over 60's' was a meeting held every Wednesday afternoon.

1979 saw it's 21st Anniversary.  There follows a picture and details of an article in the East Kent Mercury, as well as a programe for one of the meetings and details from our own history book. 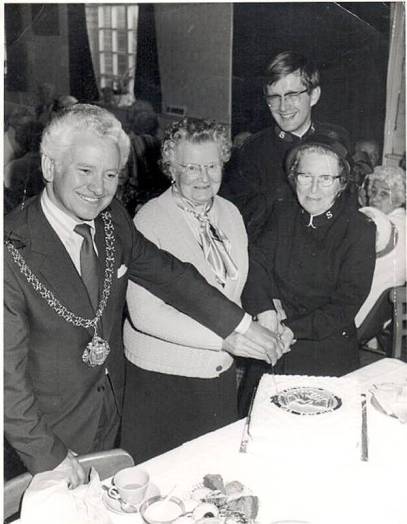 The above photo appeared in the East Kent Mercury with the following short article.

"The Salvation Army held the 21st Anniversary celebrations for their Senior Citizens Friendly Hour Club on Saturday at the Citadel.  Pictured cutting the special birthday tea is Deal Town Mayor Cllr. Eric Ferris.  Assisting him are Mrs Norah Mort who is the oldest member and secretary Jessie Crane.  At the back is Lt. David Sterling."

The entry in our history book reads - A very happy weekend commencing with a birthday tea and followed by a programme presented by the club members.  The choir also participated in the salvation meeting.  We had the great joy of seeing one of the members, Mr Fred Taylor, enrolled as a senior soldier in full Salvation Army uniform.

The two images below are the programme for the event. 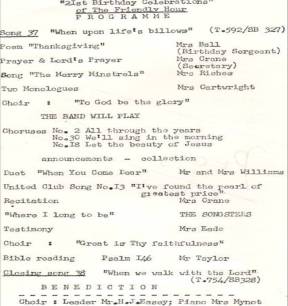 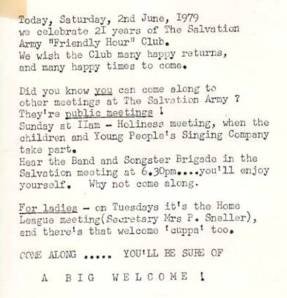 The following photos and newpaper articles records the award being presented at The Salvation Army Hall by the Mayor of Deal, Councillor Mrs Ruth Purnell. 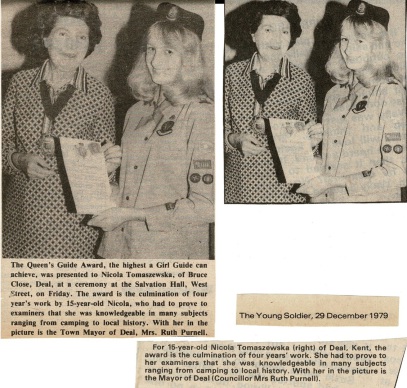 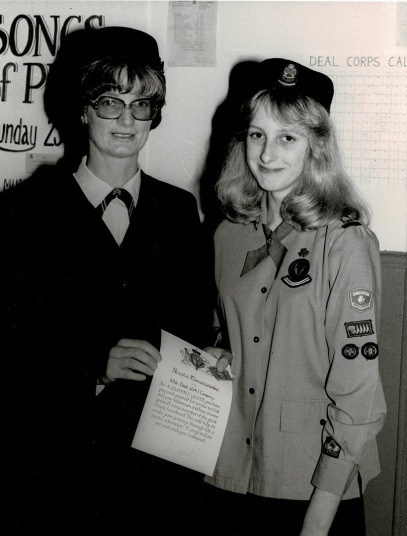 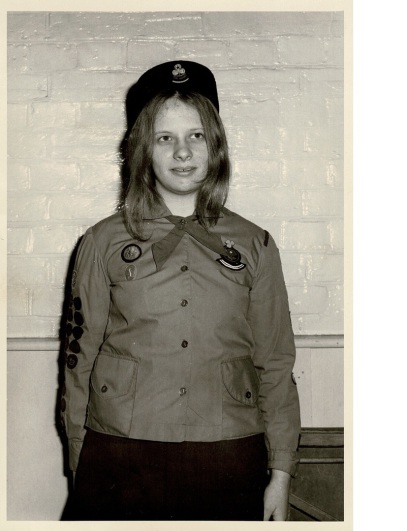 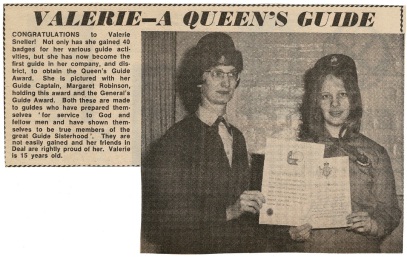 The following photo and the same photo with caption from the East Kent Mercury record the visit of Captain Rosemary Horn, National Guide Organiser of The Salvation Army visiting Deal. 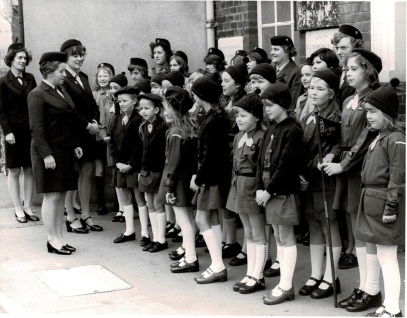 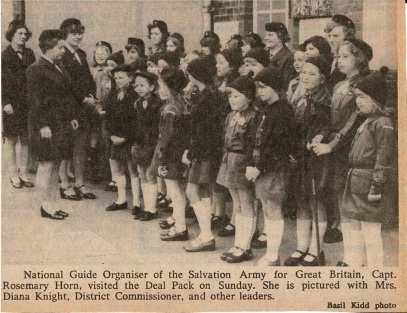 Guides on a visit

The following photos show the Guides on a visit.  Do you where this was?  If so please get in touch. 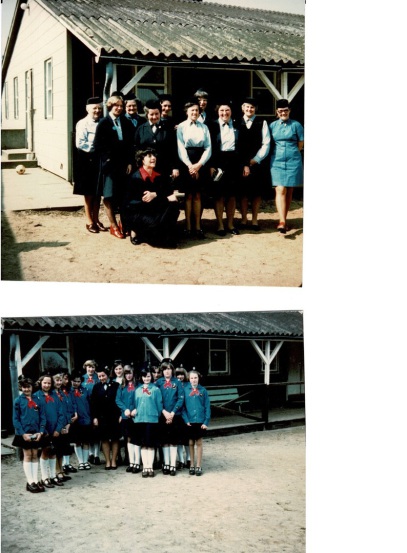