Good Friday meetings conducted in our own hall, good attendance at night.

Enrolement of 5 senior soldiers transferred from the juniors.

Farewell after a very happy stay.

Joan and Bob Abel were married at Whistable Corps of The Salvation Army on 11th May 1940.

They later moved to Deal where they both attended for many years.  Bob played trombone in the Band and Joan played the organ and then piano aged into her 90's.

Bob was promoted to glory on 17th February 2005 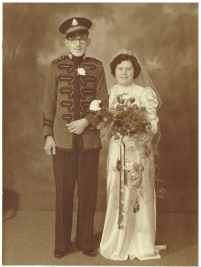